At first glance, choosing a black paint seems like an easy decision. The two most popular black pigments are Mars Black and Ivory Black. One is warm and the other is a cool, you just have to decide on which one you want to use…right? Not exactly, It’s a little more complex than that.

In this post I provide examples of how either black can be made to appear warm or cool, and I compare the tinting strength of each color.

To add to the confusion, the same pigment can have different names depending upon the brand. I created an in depth table below where I compiled the information from the different paint manufacturers. The PDF chart lists the color index names to help you determine if it’s the same pigment with a different name. It also contains the brief descriptions from the manufacturers which provides additional information that may help you to decide which black paint is best or you. Click on the image to download the black paint comparison chart as a PDF. I compare Ivory Black to Mars Black, but I also include other black pigments for reasons I’ll explain later in this post. Ivory Black and Mars Black: Are They Warm or Cool?

The idea to write this article came to me when I noticed an artist online who said that Ivory Black is a cool black and Mars Black is a warm black.

I thought this must been a typo because it’s the opposite of my experience. So I researched the black pigments from various lines of paint and it turns out that the appearance of each type of black paint depends upon the manufacturer. Some manufacturers describe Mars Black as a warm black, while others say Ivory Black is the warm black.

For example, Williamsburg describes their Ivory Black oil paint as “cool black” while Winsor & Newton describe their Ivory Black oil paint as having “brown undertones.” They both list PBk9 as the pigment so I’m not sure why there’s a difference in appearance. Perhaps they have different sources for the pigment or maybe it’s the way that they prepare it. The important point is that there’s no definitive answer to which black is warm and which is cool. You have to research the information from the manufacturer or try the colors for yourself.

I have a tube of Mars Black and Ivory Black from Liquitex. When I use it straight from the tube, the Ivory Black has a slightly warmer appearance than the Mars black. The difference is very subtle. However, one very important point is that the way that you lighten black has a dramatic impact upon whether it appears warm or cool.

How to Make Black Paint Look Warm or Cool

The photographs below demonstrate how much of an impact white has upon black. When you mix white with black, it creates a cool gray. The swatches in the top row are a mixture of Mars Black and Titanium White. Using the white to lighten the Mars Black creates cool grays.

The grays at the bottom of the photo are a mixture of Mars Black and acrylic glazing medium. When you use black transparently, it creates a warm black. Notice how much warmer Mars Black is when you use it transparently, especially when you compare it to the mixtures of Titanium White and Mars Black above it. The paper that I painted this on has a warm appearance, but it’s not enough to create this effect. 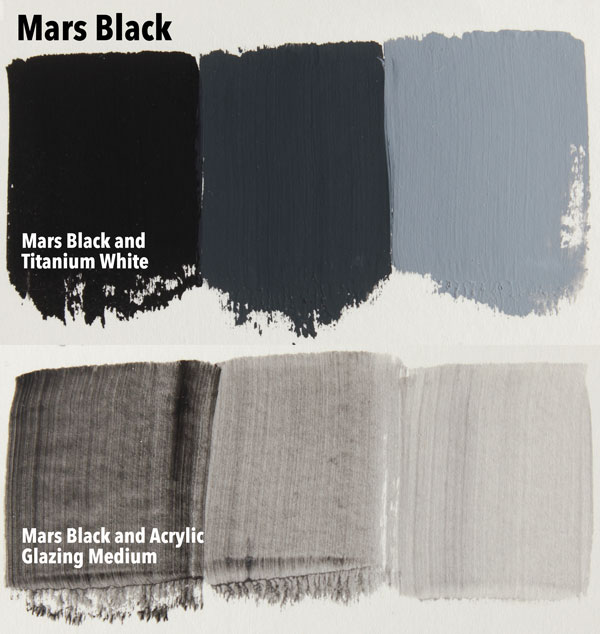 In the top row, I mix Mars Black with Titanium White. It creates grays that have a cool appearance. The bottom row is a mixture of Mars Black with acrylic glazing medium

You may think that it has to do with the Mars Black that I’m using, but I can create the same effect with Ivory Black, as shown in the photos below. It appears as though the warmth or coolness of black is more dependent upon whether you mix it with white or use it transparently. The swatches in the top row are a mixture of Ivory Black and Titanium White. It creates cool grays. The warm grays at the bottom are the same Ivory Black mixed with acrylic glazing medium.

If you want to work opaquely and still create warm grays, then you’ll have to add a warm color to your black before you mix grays from it. This will give your grays a warm appearance while still maintaining the opacity. The opacity makes it easier to paint over mistakes and to make corrections.

Working transparently is more challenging because you have to be more aware of the values as you work. If the painting becomes too dark, then it can be difficult to lighten it without adding white.

You can thin acrylics with water or acrylic mediums to make them transparent. If you’re working with oils, you can work transparently by thinning your paints with a medium instead of white.

Alternative Names for the Same Pigment

From the information that I gleaned from the manufacturers websites, Ivory Black and Bone Black are the same pigment. Originally, Ivory Black was originally made from charred ivory. Using elephant tusks in products currently isn’t popular or legal so they now use charred animal bones.

If you’re looking to avoid buying products that contain animal products then it appears as though you should avoid buying Bone Black or Ivory Black. That’s because most of the manufacturers state that they’re both made from burnt animal bones. Carbon Black, Lamp Black, and Mars Black appear to be free from animal products but you may want to check with the manufacturer to make sure before you buy them.